Drew Hayes,Amy Landon,Tantor Audio Oct 20, 2021 Drew Hayes,Amy Landon,Tantor Audio
Gifted with meta-human powers in a world full of capes and villains, Tori Rivas kept away from the limelight, preferring to work as a thief in the shadows. But when she's captured trying to rob a vault that belongs to a secret guild of villains, she's offered a hard choice: prove she has what it takes to join them or be eliminated. Apprenticed to one of the world's most powerful (and supposedly dead) villains, she is thrust into a strange world where the lines that divide superheroes and criminals are more complex than they seem. The education of a villain is not an easy one, and Tori will have to learn quickly if she wants to survive. On top of the peril she faces from her own teacher, there are also the capes and fellow apprentices to worry about, to say nothing of having to keep up a civilian cover. Most dangerous of all, though, are those who loathe the guild's very existence. Old grudges mean some are willing to go to any length to see the guild turned to ash, along with each one of its members. Even the lowly apprentices. 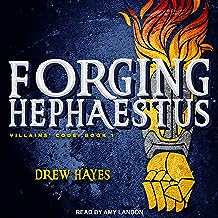